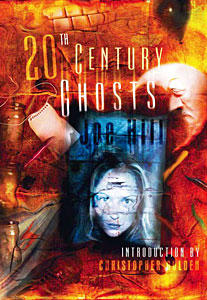 Small presses take chances all the time; it’s the nature of the business. However, when one of the best small presses in the business decides to take a chance, publishing the first short story collection (and I think, first book), by a pretty much unknown writer, and then decides to produce it in what looks to be the biggest print run they’ve ever done, you need to pay attention.

It’s been known around the traps for a while that Pete Crowther’s PS Publishing will publish newcomer Joe Hill‘s debut story collection, Twentieth Century Ghosts, this coming September. It’s only just been announced, though, that the book will appear in three editions, including an affordable thousand-copy trade paperback.

As you can imagine, I began to wonder why. I’d recently read a story of Hill’s in Postscripts magazine, “Best New Horror”, and had thought it was one of the best stories I’d read so far this year. Well, yesterday, in amongst some other reading, I began to work my way through Twentieth Century Ghosts. Because I’m also reading for my year’s bests, I decided to start with the collection’s two previously unpublished stories, “The Cape” and “My Father’s Mask”. The first of these is an amazing story, subtle and powerful. It starts in a place a writer like Stephen King might recognise. A seven-year-old boy is playing superheroes in his backyard, climbing a tree to tease his elder brother, who is fast outgrowing such games and is unimpressed. In an appalling accident, he falls, hurting himself badly. His injuries haunt him into adulthood, as do confusing recollections about what actually happened. To tell more would be to spoil the story, but it’s terrific. I’ll probably read “My Father’s Mask” tonight, and then on through the other twelve stories in the book. If those other stories live up to “Best New Horror” and “The Cape”, then Crowther’s confidence in the book will have been more than justified and he will have published one of the year’s very best collections. If you like great short stories, or horror fiction, this may prove an essential (and affordable) purchase.