Although I’m not a great fan of that terrible photo of me in the collage, herewith a link to the Articulate coverage of Conjure. Gary Kemble and the ABC crew did a great job of covering the event, and I had a terrific time over the long weekend.

Science fiction’s most famous critic John Clute reviews Theodora Goss’s first short story collection, In the Forest of Forgetting, in the latest instalment of Excessive Candour, his column at SciFi.com. Clute rightly praises Goss’s fine collection, placing it in the same group as Joe Hill’s 20th Century Ghosts, Glen Hirshberg’s The Two Sams and Kelly Link’s Magic for Beginners as “one the finest collections of short fiction from a member of that class of authors of the 21st century who are comfortable here.” You can read the stories Pip and the Fairies, Sleeping With Bears, and The Rapid Advance of Sorrow online. Do so, then go buy a copy.

There are many interesting things Clute says in the review (go read it), but I particularly found myself nodding my head when it came to the idea that many collections could do with tighter selection criteria. For all the quality of many of the books coming out, I find that more and more to be true. Reading many of these books, I find myself asking ‘would Jim Turner have done that’? It’s a worthwhile question. 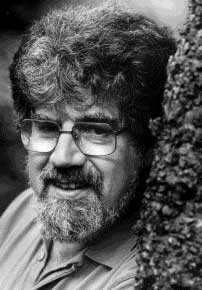 This year, as the previous recipient, I was asked to present the award as part of the 2006 Ditmar Awards ceremony, held at Conjure over the long weekend. As you can see from the photo at right, the award was presented to my friend Peter Nicholls, who richly deserved it. You can see some of the many reasons why here. The award was accepted on Peter’s behalf by Jenny Blackford.

The award recipients to date are: