I’ve been watching cricket for so long that I don’t remember when I saw my first game. I played the game as a schoolboy, I went down to the WACA and watched games, and I spent long hot summers watching Australia play.Â  I remember Kerry Packer’s pyjama cricket, the Supertests, the white ball, the aluminium bat.Â  I was thrilled to meet Dennis Lillee’s mum and dad when my dad took me out to their house to get some memorabilia they were selling, and I watched through the long, lean years: the post-Ian Chappell Years; the Kim Hughes Years; sitting up late at night watching dismal team performances beamed from the UK as the Ashes were lost again, or seeing our batsman struggle with brutal West Indian pace attacks throughout the 80s.

I’ll confess that I felt no sympathy whatsoever for the opposition teams during the enormous victories Australia achieved over the past 10 years.Â  I thrilled to see the levels of skill on show, the hunger to play, and the sheer domination of the game. I knew that had to end, and when Martyn, Langer, McGrath, Warne, and Gilchrist all retired it was inevitable it would end.Â  This past few weeks has proven that’s the case.Â  The batting line-up is brittle, with Hayden on his last legs and the remainder either too old or too inconsistent.Â  The bowling attack was worse: Brett Lee had never been more than a first change bowler, and replacements just weren’t really available. That’s not to say there aren’t positives, though. Ponting himself is a lousy captain, but a great player.Â  Haddin is developing into a fine player, as is Mitchell Johnson.Â  I don’t see a future for Krezja, but some of the other guys are promising.Â  If the selectors can be brave and opt for youth, rather than hoping for the recovering of the over-33 brigade, there’s a chance we could field a credible team for the Ashes.

Regardless of that, though, congratulations to South Africa who do look like the best side in the world right now. India is probably second, on balance.Â  And Australia is a close third.Â  The difference between now and the past ten years, though, is that the gap between the teams isn’t enormous.Â  Australia can regain a dominant place in world cricket if it’s smart and tough. Â  Oh, and the Sydney test is looking pretty crucial.

I’ve been thinking about working over the Christmas/New Year period.Â  Every year for the past decade I’ve been busy, more or less, working on essays, editing, copyedits and so on.Â Â  It’s important and I’ve been happy to do it, but I’ve noticed this past week I’ve been getting a lot of emails telling me that people associated with the publishing business are closed from 23 December to January 5.Â  This sounds like an eminently sensible thing to do.Â  There should be a time of the year when you can sit back and relax.Â Â  What I’ve also noticed is that some of the publishers send out copyedits etc just before 23 December and then expecting back by January 5.Â  I can see why.Â  Anyhow, I’m considering following publishing’s lead and, next Christmas, closing Jonathan Strahan Publications on 23 December 2009 and not reopening till 5 January 2010.Â  I’d not blog, not answer emails, and not do anything to do with any kind of work.Â  Just spend time with the family.Â  If I can get columns edited by the 23rd, it should be doable, and it does sound attractive.

Anyhow, with New Year’s Eve almost upon us I’m reviewing copyedits for one book, editing columns for Locus, and I’ve just started writing my year in review essay for the magazine. It’s about half done, so I should get it in by the weekend.Â  A little late, but two weeks earlier than 2008, which is some kind of improvement.

I know, I know.Â  You’ve all seen the wonders of Doctor Grordbort’s Infallible Aether Oscillators – a series of wondrous and devastating devices designed and constructed by Greg Broadmore of Weta Workshops. Whether it’s the Victorious Mongoose, the Unnatural Selector, or the Goliathon 800 Moonhater Deathray, one of these is sure to call out to the inner child who responded to the joys of steampunk, early space opera, and Spaceman Spiff.Â Â  I confess, though, that I’ve been feeling the Grordbort love just recently.Â  The Moonhater may be a bit much for the average household, but there’s definitely a destructive device or two that could bring a smile to my face should it arrive at Merton Way.Â  And, now that I think of it, surely one of these would make the coolest SF award statuette thingy of all time!

Graham Sleight has an interesting review of Howard Waldrop’s Other Worlds, Better Lives at Strange Horizons.Â  I think he makes a lot of good points, though I liked “You Could Go Home Again” better than he did.

I guess an obvious companion set of posts to Books I’m looking forward to… is something on what I’m reading right now. This is the kind of thing I probably won’t stick with, but who knows?Â  Right now I’m going through a phase of starting a lot of books and not finishing them.Â  For some reason, around the 100 page mark, I just fade out and lose interest.Â  I think it says more about me than it does about the book in question, though who knows?Â  For instance, I started Charles de Lint’s The Mystery of Grace a couple weeks ago.Â  I like de Lint’s work and was delighted to see that he wasn’t writing about Newford in his new novel. The book starts well, but I got distracted.Â  Same for Cherryh’s Regenesis which, admittedly, is heavier going.Â Â  I got to around page 250 on that.Â  Anyway, I’m not going into too much detail on what’s wrong with things here and, in some instances, will just report that I’m reading a book because that seems appropriate. 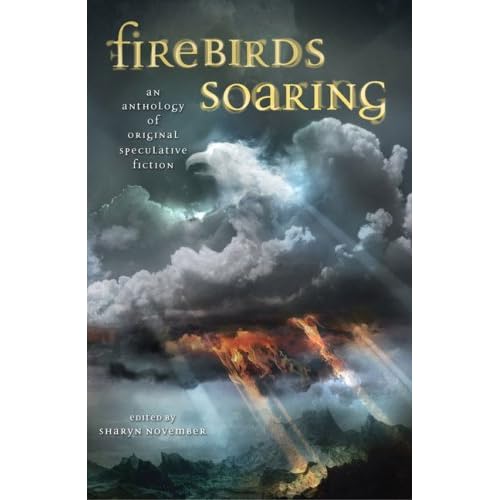 First up, I’m reading Sharyn November’s third ‘Firebirds’ anthology, Firebirds Soaring. Like it’s predecessors it’s a mixed SF/F anthology aimed pretty much at the YA market and features writers who contribute to the Firebirds publishing imprint along with others. I’m reading it for my year’s best, and it includes very good stories by Margo Lanagan, Ellen Klages, Louise Marley and Jo Walton.Â  I still have about five stories or so to finish, but I think it’s a very good book. It’s out in March.
On the plane home from Calgary in November I flicked through Felix Gilman’s Thunderer. It’s a fantasy, his first, and, as I mentioned below, was recommended by Katie Menick who told me it’s terrific. I believe Katie, so it’s currently sitting in my office on my desk. I’ve read the opening chapter, which is intriguing.Â  If all goes well, I hope to really get into it over the next week or two.

I’m also thumbing through James Enge’s first novel, Blood of Ambrose. I’m going to talk about this more when I get to the April instalment of Books I’m looking forward to…. I have all sorts of conflicts of interest recommending it. It’s edited by my good friend and collaborator Lou Anders and Enge has written a terrific short for Lou and my anthology, Conquering Swords, but I am interested to see what he’s done with the novel. It has the same lead character as the one in his Conquering Swords story so I’m intrigued.

And finally, the postman yesterday brought me a galley of China Mieville’s new novel, The City and the City. I started reading this on my Sony Reader last week and am about four chapters into it.Â  I know China would prefer that details about the book don’t get out yet, so I’ll just say it has a much cleaner, tighter style than his previous novels, and that it’s a new stand-alone.Â  It also, as you’d imagine from the title, focusses on his love of cities and is reminiscent of his short story “Reports of Certain Events in London” (from McSweeney’s). I’m not going to say much more till closer to its June publication, but it looks very good so far.