Well, I sort of fell off the map for a while there, huh? I was going to give you a little update on the books that interested me, excited me, or in some way held my attention each month, and here I am havingÂ  missed two months of posts.

Hey la. It is the way it goes. I’ve been busy, which you know. I posted about some of it over on LJ while this blog was not playing well with me, never mind others, but I’ll try to update y’all here shortly. In the meantime, a return of sorts to normal programming. 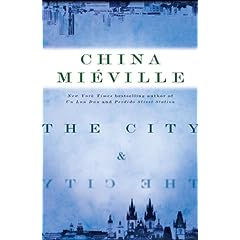 Had I been telling you about books I was looking forward to for May, I would have told you how excited I was about China Mieville’s The City & the City. Everyone else has reviewed it, so there’s no real need for me to do it here. But, freakin’ heck. It’s a new China novel and it’s a Kafkaesque murder mystery. WTF! How could you not find that to be an incredibly cool thing?

The other big book for me in May was The Best of Michael Moorcock, from the good folk at Tachyon. I’ve not read much Moorcock. I’ve meant to. Honest. But he’s so damned prolific and I can never figure out if you should read Elric or Hawkmoon or Jerry Cornelius or … Gack. But I read his novelette, “London Bone”, in New Worlds years ago and it was stunning. The guy clearly can write. Everyone else says he can, but it’s like here’s proof right?Â  And then the VanderMeers (who are editing their damned socks off lately, with some awesomely good stuff) andÂ  John Davey show up with a nice, neat single volume ‘how to read Mike’ packaged as a ‘best of’.Â  I had to sign up. It’s the book that everyone who meant to read Moorcock should get. Clearly essential.

There were a couple other May books on my radar. I absolutely, totally, completely love some of the books that Gavin and Kelly do at Small Beer. And everyone says Greer Gilman is awesome (though I’ve sort of struggled). So I am really interested in her Cloud and Ashes, which sounds cool. And then there’s the second Patrick Ness book. I only just bought the first one, but everyone says it’s essential, so I’m game.

The June catch-up is a little different because I’m actually reading one of the books right now.Â  Joe Abercrombie’s novels haven’t really appealed to, me. I think it’s the covers, with all of that parchmenty stuff. Not my thing. And then they’re big and series-shaped. The Golden Rule applied (over 400 pages long + sez vol. 1 on the cover = pass) and the ARCS and finals of the ‘First Law’ trilogy went into the big cupboard in the hall where ‘Books Not Destined to be Read by Jonathan’ end up.Â  And then Lou said ‘He’s cool. We should get him for Conquering Swords‘. I said, sure, and he sent us a completely terrific story. And then I was looking for something to read and there was this like house-sized galley of Best Served Cold sitting on the shelf. It had the parchmenty thing going on and it was huuuuuge, but I picked it up and was completely sucked in. It’s all swords and sorcery and blood and guts and revenge and stuff. Way cool so far. Consider it recommended.Â  Hmm. Guess I better go digging through the big cupboard for those earlier books, huh?

Then there are two books from the good folk at Tor which I want to get to, time permitting. I have the ARC of Jay Lake’s Green sitting on my desk at the moment. I read the opening chapter, which is completely kick ass. Jay’s been improving steadily as a writer, and this looks like it could be THE book for him.Â  And the cover is gorgeous.Â  What more could you want?Â  And finally, there’s Robert Charles Wilson’s Julian Comstock. I read the novella a year or two ago and it was stunning, so I can’t wait to get to this. Maybe on the plane.

And that’s us, sort of, caught up, on Books I’m Looking Forward To. Every time I sit down to write one of these I’m reminded of how much I love books and reading – which is a welcome tonic when you have a tendency to be a bit jaded from time to time. I have to remind myself: there’s always something awesome out there to read. If you’re not finding it, you’re not looking.

Now that I have the blog running I find myself more interested in fooling with the look, than anything else. I’ll mess with it some more, but something LIKE this one could be the go. I want something clean and simple, butÂ  geeky too.