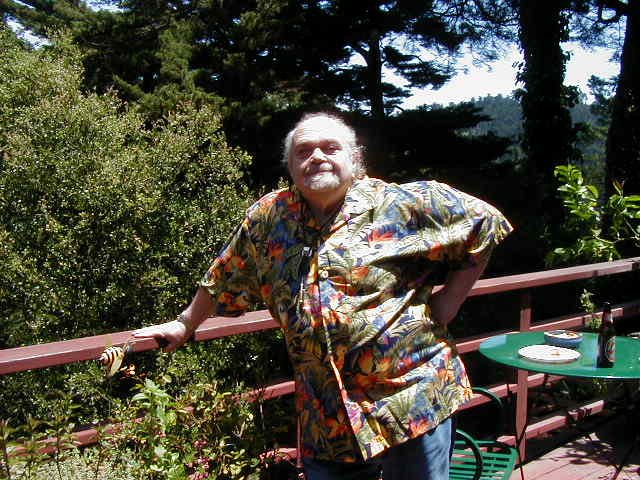 I’ve been thinking about how I’d like to remember CHARLES.Â  I knew him for sixteen years, and during that time he both didn’t change at all and changed a lot.Â  Somewhere about 2005 he began to get older: he got tireder, more likely to fall asleep, and started needing scooters to get around conventions.Â  He found that the late nights took more out of him, and so the late nights on the back deck at Locus became shorter affairs.

Today I looked for photos of him, ones that fit the CHARLES I knew the most.Â  I stumbled across this one. It was taken in June of 2002, I think. It was a few months after we’d agreed I was to become reviews editor and not that long before I headed over for Con Jose.Â  Shortly, Marianne, a toddler named Jessica, and a baby named Sophie would pile in for a few days, inhabiting his downstairs and consuming his home for a while, all of which he graciously absorbed like the patriarch he was.

So this is the image of him I’ll keep: alert, full of life, completely himself, and with some of the best years of our friendship in front of us. I think of him every day.