This morning Lonestarcon, the 71st World Science Fiction Convention, released the 2013 Hugo Awards Ballots. The Coode Street Podcast was nominated for Best Fancast, and we would like to thank everyone who nominated us.

As part of the Hugo Awards discussions, we invited fellow nominee and Coode Street regular Kij Johnson, to join us in the Waldorf Room once more to chat about the ballot, the nominees, and all things Hugo.

As always, we hope you enjoy the podcast. 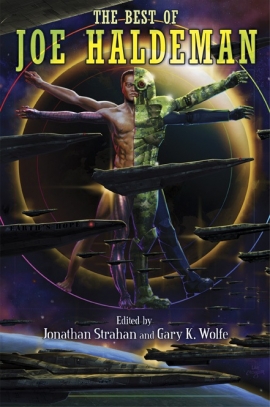 Returning from a brief hiatus, this week the Coode Street team avoided the Gershwin Room, instead heading down to Florida for the International Conference on the Fantastic in the Arts, where Gary persuaded Joe and Gay Haldeman to join us on the podcast to discuss The Forever War, the writing life and the soon to be published retrospective short story collection, The Best of Joe Haldeman.Â  As always, we’d like to thank Joe and Gay, and hope you enjoy the podcast.

And March draws to a close with another brand new story over at Eclipse Online, this time a powerful new science fiction story, “In Metal, In Bone“, by An Owomoyela. I’m delighted to be able to feature it over at Eclipse and hope enjoy it as much as I did.

The finalists for the 2012 Aurealis Awards have been announced and I’m delighted to see that Edge of Infinity, Under My Hat: Tales from the Cauldron, and The Best Science Fiction and Fantasy of the Year: Volume Six have been nominated for Best Anthology, alongside two fine books from Ticonderoga Publications, The Year’s Best Australian Fantasy and Horror 2011 edited by Liz Gryb and Talie Helene, and Bloodstones edited by Amanda Pillar. I’m delighted to be nominated alongside them, and wish them every succcess on the big night!

I am especially delighted with the news because it was such a pleasure working alongside Jonathan Oliver and the Solaris Team on Edge of Infinity, with Jim Thomas and the Random House team and Sara Odedina and the Hot Key team on Under My Hat: Tales from the Cauldron, and with Ross Lockhart and Marty Halpern on The Best Science Fiction and Fantasy of the Year: Volume Six.Â Â  I’ve been extremely fortunate to have such a dedicated, talented and hard working bunch of people there to make me look good.

I would like to acknowledge, though, that the true credit belongs to the wonderful writers who sent me stories and let me print or reprint them in my books – I’m very lucky and working with them really is enough reward in itself.

It would be remiss of me, too, to not shout out to all of my friends who are nominated in other categories — too many to name – all of whom deserve enormous congratulations!

Saturday went fairly easy, here on Coode Street. I was up early, got a five km walk in before breakfast, then packed, kissed the family goodbye and headed out to the airport to fly to Sydney to see Springsteen. The flight – the first trip outside of WA with my brother since we stepped off a boat in 1968 – was fine. We chatted, I watched Searching for SugarmanÂ on my iPad, tried not to be annoyed that the inflight entertainment didn’t work at my seat, and arrived in Sydney fairly fresh. We were met at the airport and before I knew it I was at Garth and Anna’s, sitting outside, eating curry and enjoying the wonderful conversation of G&A, Alison, Melina, James and Mardie. Â It was a great evening, and when everyone drifted off Garth and I chatted into the small hours.

Sunday I was up fairly early, even allowing for time differences. I got to chat with Anna over pancakes, then with Garth over coffee. They were kind, wonderful hosts, but before I knew it I was in a cab and headed for the city. I got to the hotel in time to drop off a bag and then grab yum cha with my dear travel buddy, Deb, where we talked of all sorts of things over steamed morsels and jasmine tea. Â Hours drifted by and before I knew it we’d finished coffee back at the hotel, said goodbye, and I headed to the 37th Floor to crash for a little while. Stephen arrived around 6pm and we had what proved to be a relaxing time over drinks in the Excecutive Lounge, before grabbing dinner at Glass. Â  All in all a fine day.

Sleep, though, as it has of late proved a little elusive, though I didn’t put the waking hours to much use. Today should be a day to chill and wander around town a bit before heading out to Allphone Arena for the show. It should be something special.