I’m a little bit late as always, but here we go again with ‘Books I’m Looking Forward To’, this time covering books that are scheduled to be published in March 2009.  I generally don’t prepare much when I’m writing for the blog, which probably shows, but I did go back and re-read the first two instalments of this series before getting started and it was pretty rough. Lots of repetition, lots of ‘terrific’, but not a lot to let you know what a book might be like.  In my defence, that’s not the easiest thing to do given that I’ve often haven’t actually read the books in question. Still, I’ll try to do a little better this time around. 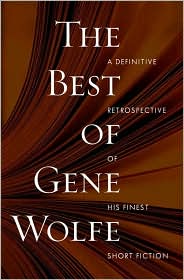 A while ago I started, and subsequently abandoned, a series of posts for this blog about ‘Unbooks’: books that I’d like to have but which didn’t exist. One of those books was ‘The Best of Gene Wolfe’.  Wolfe has been writing since the early 1960s and has published a large and varied body of work. It seemed to me that someone should assemble a smart, tightly edited book that would give a newcomer to his work a real taste of what his writing is like. It always seems to me that readers who’ve heard of Wolfe but not read him seem baffled, intimidated or wary.  I was delighted, therefore, to hear that Tor planned to publish just such a volume, and that it would appear in March of this year.

An Advance Review Copy fell through my mailbox a while ago and, while it’s not the book I envisaged, it is pretty close to what we need.  The thirty-one stories in The Best of Gene Wolfe: A Definitive Retrospective of His Short Fiction are selected by Wolfe and cover the period from 1970 to 1999 (more than half of the stories here were published during the 1970s).  The stories are smart and sly, wistful and wonderful, but most of all they are exactly what you’re don’t expect from Wolfe (if you’ve not read him): they’re entertaining. It’s my suspicion Wolfe is the best and smartest writer ever to write pulp science fiction and fantasy.  Many of the tropes of pulp fiction are here, and those that aren’t probably reside elsewhere in his bibliography.  Is it worth the price of admission?  Easily. Any book that includes “Seven American Nights”, “The Cabin on the Coast”, “The Island of Doctor Death and Other Stories”, and “The Detective of Dreams” is an utterly essential book, and not because you ought to have it for your collection but because it’s smart and funny and touching and terrific to read.  I could quibble with some story selections – why, for example, no “Empire of Foliage and Flower” when I’m sure I read somewhere that Wolfe thinks it’s his best short story? – but it’s pointless. You need this collection of 20th Century Wolfe, and we can only hope we’ll see the 21st Century Wolfe collected before too long as well.  And yes, this one is essential.

I came late to the Peter Beagle show. I missed The Last Unicorn, and have never really been captivated by the book.  On the other hand, I loved The Folk of the Air and have eagerly picked up one book after the other as they slowly were published during the ’80s and ’90s.  Back around 2002 Beagle, who had never been a prolific short story writer (I think most if not all of it resided in a single collection at the time), suddenly began to publish a lot of short stories.  Mostly fantasy, but richer and more complex than his earlier short work.  He won a Hugo and a Nebula, published a new ‘Last Unicorn’ story and fast established himself as one of the best writers of short fiction in the field (he was already one of our best novelists).  Now, before I continue, fair warning.  I have done business with Peter and have been honored to publish two of his short stories, so I’m not without bias. Still, this is about books I’m looking forward to, so some bias is acceptable.

The good folk at Tachyon are publishing Peter’s new short story collection, We Never Talk About My Brother, next month and it includes “The Last and Only” from my anthology Eclipse One.  I’ve not seen a full table of contents for the book yet, but the stories I have read are extraordinary.  There’s the wistful tale of a man who becomes French from the inside out, a fantasy epic in 4000 wds, a funny story about an annoying kid brother who is also a wizard, and a LOT more.  What more could you want from a collection of stories?  And yes, all of Peter’s story collections are worth it.

Now, lest you are thinking that I only read short fiction these days, a novel or two.  I have an irrational love for Bruce Sterling’s work.  I started reading him back in the mid-1980s, I guess, when Gardner Dozois started featuring his Shaper and Mechanist stories in his Year’s Best annuals.  The story that really stuck with me back then, though, was “Green Days in Brunei”.  There was something about the vital creative energy it portrayed happening in a decaying tropical environment that really resonated.  Then there was Islands in the Net, my second favorite of his novels, which expanded on the feel of that story.  He then produced his finest novel, Holy Fire, as well as a bunch of terrific short stories.  I know how terrific they are because I edited a career retrospective a year or so ago, Ascendancies, and was amazed at just jhow strong they are and how well they stand up a quarter century later.  Any how, his new novel The Caryatids will be out in a few weeks, and at a glance it seems very much of a piece with Islands in the Net, sharing the same vibe.  I have a copy of this on my Sony Reader, but I’ve actually been holding out to get a physical copy of the book (now winging its way towards me) so I can dive into it. Cory just raved about it on boingboing and it makes me even more excited about getting this one.

The other novel I can’t wait to get hold of in March is Walter Jon Williams’s This is Not a Game. If you’re a science fiction reader, you don’t need me to tell you why.  Metropolitan, City on Fire, and Aristoi: his body of work speaks for itself.  Any new Walter novel is cause for celebration, and celebrating is what I plan to do. I loved last year’s Implied Spaces, which was a pure SFnal romp, and this story of gaming, game theory and such sounds intriguing.   I can’t wait to pick up a copy.

Oh, and one other quick one.  My editor and friend Sharyn November publishes the third ‘Firebirds’ anthology, Firebirds Soaring.  I got a sneek peek at it the other month and it has great stories by Margo Lanagan, Ellen Klages, and Marly Youmans. You have the others, and you need this one to complete the set.  Top notch!