I’m as surprised as you are that I’m following through, and actually writing a second instalment of ‘Books I’m looking forward to…’.Â  I think it might be that I’m getting to it because I should be doing other things – that’s how these things tend to work.Â  Anyhow, February looks like a great month with some books I’m really eager to see. 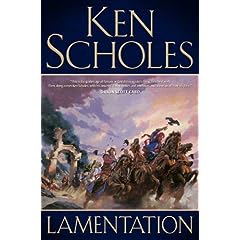 Let’s start with a book that I’ve actually read, but which is only being published now.Â  Last year Patrick Nielsen Hayden at Tor sent me an earlier reader’s copy of a debut fantasy novel they were publishing by some guy I’d never heard of, Ken Scholes.Â  Now, truthfully, I’m starved for time, so it’s easy for me to skip novels these days, and very easy to skip first volumes in series. Still, Patrick had sent it, and I had some spare time, so I started reading the opening chapter of Lamentation and was nearly put off by one or two standard fantasy tropes.Â  There were fantasy names and such, and I thought for a moment that this was going to be another generic cookiecutter story, butI kept reading and I’m delighted I did.Â  The story of the devastation of Windwir, a great city of learning, and the consequences that flow from it were captivating. I found myself entranced by the tale of the young man who lost his father in the devastation, the old man called back from retirement to deal with it, and so much more.Â  There were flashes of science fiction in the background too – metal men and so on – but mostly there was a tale strapped to a story engine that just didn’t quit.Â Â  Lamentation isn’t, to be fair, the greatest novel ever written, nor is it perfect. However, it is really good, and is an excellent first novel.Â  I was sufficiently hooked that I harassed Ken into letting me read the second book in the series, Canticle, which I actually think is a much better book than Lamentation (a good sign for the series), and can’t wait to see Antiphon when he’s done with it.Â  I guess I should add, as a caveat, that as a result of Patrick sending me Lamentation, I ended up meeting Ken and becoming pals, so I am recommending a book by friend.Â  Still, I stand by the recommendation. Even though I’ve read Lamentation, I loved it enough that I’m going to buy a copy just so I have one.

I don’t spend a lot of time making lists anymore, but if I did Ian McDonald would probably sit in my list of Top 10 Favourite Short Story Writers of the last 25 years, and I believe that he is one of the best short story writers working in SF today.Â  I 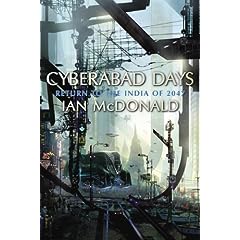 remember being knocked out by an early story of his, “Unfinished Portrait of the King of Pain by Vincent Van Gogh”, which was reprinted in first collection back in the late ’80s, and loving his debut novel, Desolation Road.Â  I read everything he published after that, and was disappointed when his books stopped appearing in the US.Â  All that changed when his spectacular novel River of Gods came out a few years back from Simon & Schuster, and then was reprinted in the US by Pyr.Â  A major work by McDonald, it seemed to change his fortunes and he’s followed it up with the almost-as-good Brasyl.Â  At the same time he published a lot of short fiction, including a handful of stories set in the same near future India as River of Gods.Â  Those stories have now been collected in a pendant volume, Cyberabad Days, which will be published in trade paperback with a stunning Stephan Martiniere cover by Pyr (and later for Gollancz).Â  The collection features a long original novella, as well as all of the other ‘Cyberabad’ stories.Â  I’m not exaggerating when I say this is the collection I’ve been most looking forward to in 2009.Â  I love these stories, am stupidly proud to have originally published one of them, and will be ordering a copy the moment it hits Amazon.Â  You need this book.Â  Really.

I’ve not seen a table of contents yet for Gwyneth Jones’ forthcoming collection, Grazing the Long Acre, but I’m really excited about this book too.Â  I know, I know â€“ this instalment of ‘Books I’m looking forward to’ is all hyperbole. Well, they’re recommendations!Â  Anyhow, I loved Gwyneth’s ‘Bold as Love’ quintet of novels and was lucky enough to have her write several stories for books I was editing.Â  Somewhere in there I began seeking out stories of hers, reading novels I’d missed, and I fell in love with her work.Â  It’s smart, unflinching, demanding and intellectually honest.Â  I think she’s one of the finest SF writers working today, and one of the most unappreciated.Â  I hope this new PS Publishing collection will help change that a little. If these are her best stories of the past five years, then they’re some of the best SF stories of the past five years, period.Â  I can’t wait to see it.

There are also a couple small books I’m looking forward to.Â  In February Tachyon are publishing a long novella/short novel by James Morrow, Shambling Towards Hiroshima.Â  I love, love, love Morrow’s work.Â  So a post WW2 tale with Godzilla is irresistible.Â  Tachyon sent me an ARC of this one, and I’m going to read it next. I’m also going to order a copy.Â  I want the actual book, and it’s important to support publishers like Tachyon when you can.Â  Buy it!Â  I’m also eager to see Tim Powers’ “A Time To Cast Away Stones“.Â  It’s coming out in a stupidly expensive edition from Charnel House to celebrate their 20th Anniversary. It’s Powers, which is enough.Â  Essential!

And so, that’s the second instalment of â€˜Books I’m looking forward to…!’.Â  Hope you pick some of them up, and I’ll try to report on the books I do mention here as I get them and read them.